Tuesday will make two weeks that I’ve been sitting on the edge of my seat. No one knows that the gears of the bureaucracy grind slowly better than I do, but seriously all I’m waiting for is one simple phone call. I get that there is a laundry list of things that has to get done before making that call, but two weeks doesn’t seem like an unreasonable amount of time to get those widgets lined up. If I weren’t so stoked at the idea of bringing an end to my long mid-southern exile, I’d probably have more patience with the process. As it is, I’m feeling a bit like a 16 year old girl waiting to get asked to the prom. Honest. I sit at my desk waiting for the little blue light to flash. Or more often, obsess over why it’s not flashing.

I’m really, really ready to get this waiting part of the exercise over with. Every day, I wake up and grab on to the idea that today will be the day. I have to. Hope in getting that call is just about the only thing keeping me from climbing a nice belltower somewhere.

Sugar free Jello is food, I suppose, if you use the broadest possible definition. Having no actual nutritional value and minimal taste, it ranks somewhere between cardboard and unflavored rice cakes on the list of things I want to eat. But there it is in the fridge. A new week, a new flavor. This week is orange. Last week was cherry. It takes most of the edge off of a nagging sweet tooth, but that’s about the only positive thing I’ll say about it.

I miss food that’s filling. I miss pasta and rice. I miss potato-based products. And lord almighty, I miss Wonder bread. Baby carrots and house salads the size of your head just don’t pack the same satisfaction of a plate of spaghetti or giant sandwich. Everything I’ve read says “there’s no reason to feel deprived” on a low carb diet… But pretty much all I’m feeling is deprived.

Meh. I’m going to bed to dream about penne and garlic bread.

All it takes is a simple phone call and all this pent up angst can come to an end. To be replaced, of course, by dozens of frantic moments trying to put everything in place on this end and that. At least then I’ll be doing something. As it is now, I’m sitting here looking at a room full of things that need to be packed up and endlessly stalking realtor.com. Neither of which feels particularly productive at the moment.

Have patience, they say. If anyone’s got the trick to that, I’m all ears.

No question about it, I’ve been slacking when it comes to posting. It’s been a bit of a week. I know that I have a formal job offer from a command in Pennsylvania that will remain nameless for now, but at the moment, I’m stuck in a state of suspended animation… somewhere between leaving the old job and arriving at the new one. Since I haven’t gotten the “official” offer yet, there’s really not much to do besides the pre-pre-planning kind of things; looking at the big picture what’s and hows of a cross-continental move. It’s too early yet to even start thinking about specifics like dates or the mechanics behind the move would work. That’s basically the long version of saying I’m effectively in a state of human resource-induced purgatory.

I’ve done this a few times now and know that when the clock starts running, things are going to start happening very quickly. Lots of decisions are going to be made in haste and things won’t slow down for 45-60 days. So yeah, there’s a pretty narrow lane of things I can do now to try getting ready. I’ve basically stopped buying groceries and started burning through whatever I have stocked in the freezer and pantry. Making good progress there. This morning I packed up the guest bedroom and bathroom. Basically everything in those two rooms is ready to be put on a truck. Maybe most important, I’ve started filling a Rubbermaid tub with the wires, cables, and accessories I’ll need to set up a TV and a wireless network whenever I get where I’m going. I figure as long as I have those, I can work out the rest on the other end.

The next step is to strip off, wrap, and pack all the nicknacks in the living room and office. Then there’s the great boxing of the books. That one always takes a while. Once that’s finished, we’re down to the kitchen and bedroom. Those I’ll hold off on until the last minute. Having one room that isn’t piled to the rafters with boxes seems to help preserve at least a touch of sanity. The truth is, I have no idea how long it’s going to take to to get the formal offer in hand and it’s entirely possible that I’m jumping the gun by a factor of weeks here – but the boxes strewn around the house and an email from Pennsylvania are currently the only real, tangible sign that I’m escaping from Memphis and the slow motion train wreck that is the office here. If it sounds like I’ve gone from cautiously optimistic to paranoid, there’s probably a good reason for that. This is the government and until the ink is dry on the paperwork, nearly anything can happen… and I’m terrified that if I breath wrong, the wheels could fall off. Sure, the probability of success is well over 99%, but the 99% is never what keeps you up at night. I’m ready to get this show on the road and every day that does by makes me a little more jumpy, even though I know it’s perfectly normal. Fun stuff, right?

To date, I’ve cast 119 resumes into the great wind that is the Army’s civilian personnel system. When you’re dealing with that kind of volume, it’s impossible to tailor each one to a specific job opening. Your best hope is that if you through enough of them against the wall, maybe, somehow, some of them will start to stick. It seems that I’m at least starting to fall into that category now – where at least a few of those resumes have found their way in front of people who are actually doing the hiring.

Yesterday was the first job I’ve interviewed for since 2002. In the interest of not jinxing myself too badly, I’m won’t get into specifics about what or where, other than to say that I’m cautiously optimistic and seem to have passed through the first round enroute to a follow-on discussion with the potential uberboss. In theory, that should take place sometime before the end of this week. After that, it takes however long it takes for the selection and notification process to work its way through to the end. It’s not generally something that happens with great rapidity.

Assuming for a moment that I actually get an offer, a whole series of questions then immediately come into play – Am I willing to sacrifice grade for more favorable geography and will doing so irreparably damage my career? Can I sustain financing a condo in Maryland, a house in Tennessee, and another place to call home all at the same time? Maybe more troubling is the nagging fear that if I jump at the first offer, I’m closing the door on a more lucrative offer at some point in the future or the even more nagging fear that the next offer could be another six months in coming. It’s the kind of decision that’s easy in theory, but in practice, well, becomes fraught with any number of potential issues.

There’s no call to worry about any of those just yet, though. For now, I’ll be happy that I at least got one opportunity to make my case. What happens next is, mostly, out of my hands – but you can bet I’ll be looking to send out resume number 120 first thing tomorrow morning.

I’ve been going to the doctor alot lately. Probably more often in the last two months than in the last five or ten years combined. It seems that, and alot of years of hard living and not are coming home to roost. What started off as a simple complaint of not sleeping and extreme thirst have become a diagnosis of Type 2 Diabetes. Not what I wanted to hear on Friday afternoon, but not hard to predict with my love of all things sweet and carb-y. My A1C wasn’t quite off the charts, but high enough to get a “wow” from Dr. Good News. My blood sugar came in north of 180 and I know it’s gone higher than that in the last month… I didn’t get a “wow” for that one.

So yeah, Dr. Killjoy sat me down for the come-to-Jesus talk about getting right with my diet and less than casual acquaintance with exercise (apparently walking from the truck to the office doesn’t count). I’m pretty sure he was trying to scare me straight with talk about insulin, but my 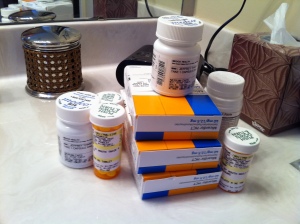 pain avoidance instinct is strong enough to want to avoid the needle if at all possible. I guess we’ll burn that bridge when we get to it. For the time being, I have a stack of new meds and will be hoping for better living through chemistry.

Last night was the great cleaning of the pantry – out with carb-y noms like cereal, pasta, juices, pop tarts, my beloved gummy bears, and maybe worst of all, the Blue Moon that was chilling in the fridge. I’ve got a fridge now full of dairy, protein, and vegetables – most of which I have no idea how to actually cook. It’s really like looking into someone else’s kitchen. Of course that’s nothing compared to the looks I’ve been giving the 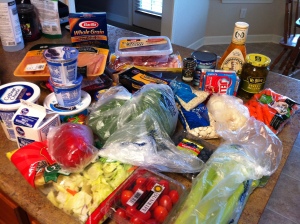 exercise bike that now lives in the spare bedroom – because, let’s face it, even on pain of death, I’m not bloody likely to go walk around the neighborhood in the cold. Exercise that can be done while watching TV seemed like something I would at least be able to tolerate.

I’m uneasy with change as a matter of principle and the change being called for here is no small order. It’s basically undoing just about every habit I’ve developed over the last 15 years. Apparently I’m not indestructible after all. That’s a tough one to come to terms with. There’s a fair chance that everything about this process will annoy, anger, or otherwise make me want to beat myself unconscious with a celery stalk… and when it does, you’ll hear it here first.

Today was the first day back at the office after a long break. Nothing abnormal about that. Happens the first week of every year. What caught me unprepared was how that little part of the world changed while I was paying attention to other things.

The last of my old school mentors retired. My right arm has moved on to learn how to tend a flock. Another is taking the long way around to chase a dream in Colorado. Add that to the ones who have made their escape already and I look around and barely recognize the place. These were the people who made a bad situation tolerable… And sometimes even fun. Lord knows I can’t begrudge them their good fortune, but Millington is going to be a much less interesting place in 2011.