It wouldn’t be New Years Eve if I didn’t take a couple of minutes to run you through the numbers for 2019.

In no particular order, here’s what they say:

Ok, yikes. So first of all, I apologize to anyone who landed here hoping to find a lawyer. I hope my namesake is a good one and everything worked out for you.

2019 was the second biggest year for views and visitors I’ve had here at WordPress. 2013 retains the crown, presumably because I was spitting so much fire about being furloughed that year… but it hasn’t kept the crown by much, so who knows what 2020 will look like.

The most read post for 2019, was a tribute to Winston. I wrote it back in January with tears streaming down cheeks. Even now, almost a year later, I can just barely make it through that post without sobbing.

In a few short hours we’ll consign 2019 to history. I wish I had something deep or insightful to close on, but all I keep thinking is what a truly strange year it has been.

There are a handful of things that I can do at the office that I physically can’t do from home. They have more to do with obnoxious and largely outdated security procedures than they do with a lack of personal ability, though.

What I think we proved today was that with the exception of those handful of things that I’m prohibited from doing at home by law, policy, or regulation, everything else can run more or less seamlessly using our electronic mailboxes, a series of various interconnected world-wide web sites, and a portable cellular telephone. It’s far from perfect and not likely something that you’d want to do for more than a day or two at a time, but as a stopgap, it works well enough – or at least better than the alternative which would have been 100% of the work not getting done. If nothing else, it gives you an option to “keep the lights on” under circumstances where they otherwise would go dark.

Now, do I think this will be the bright shining moment where the bosses realize having people willing and able to work from home is more than having a bunch of personnel sitting around with their thumb up their asses? No. No I do not. Maybe they should, but I can’t imagine a scenario where that’s actually going to happen.

What’s far more likely is they’ll race hard in the other direction – specifying new minimum staffing levels, limiting the number of people who can be on leave at any given time, and focusing on the 5% that can’t be done instead of the 95% that can. I’d like to think I’m wrong about this, but history tells me I’m probably not. My entire career has been nothing if not a series of opportunities to observe moments where good intentions gave helpful cover to bad decisions. Getting the powers that be to thinking about productive work happening outside the walls of their adjacent cubicles feels like an awfully long way to stretch given the precedents involved.

If that’s not what happens here, you’ll find me a few months from now both stunned and amazed… and it would be one of those rare occasions where I wouldn’t mind being caught off guard in the least.

Ah, it’s Columbus Day again. The day of the year when revisionists and apologists whine most loudly that we should all be wearing ashes and rending our garments and begging forgiveness for because of things men did more than 500 years ago at a time we’re no longer supposed to call the Age of Exploration.

As always, I cheerfully encourage the apologists to bugger directly off with that nonsense. I don’t judge historical events or figures through 21st century morality. They were men of their own age, with strengths and weaknesses, who achieved greatly and committed grave sins.

The age of exploration was an age of heroes. We don’t remember them because they spent their often short lifetimes boohooing the world around them, but because they dared to do what was hard and dangerous. They’re derided in the modern world, I suspect, because so many now live lives that are unfathomably easy and safe based on any measure of historical precedent.

In this household, Columbus and all the men who set out in fragile wooden ships from the old world to explore the wonders of the new will always be celebrated.

Managing the public archive has gotten significantly easier since I went through a mad tear of consolidating several different blog platforms into this one WordPress account. I can tell from the handy dashboard that shows me everything from daily views to most searched phrases and what keywords are likely to be bringing people here that the number of posts here has now swelled to 3,000.

It’s a nice round number. It’s the kind of milestone or way-marker I enjoy hitting. It shows me that regardless of that somewhat ephemeral nature of the internet, there’s a transaction record of sorts showing that I have, in fact, done a thing – even if that thing isn’t exactly the great American novel.

Sometimes I think I’d like to spend some time going back to the early days and do a bit of reading – sort of a look back at where it all started. I’ve got a bit of real curiosity about what may have changed over the last thirteen years. Or maybe I’m more likely to find that I’ve refined and expounded my ideas a bit since then, but many of them are still found firmly rooted in the soil from which they sprung originally.

From time to time someone asks why I do this. I’m not monetizing the site. In fact I pay a noiminal fee every year to prevent adds from appearing here at all. Like I wrote up there in the “About Me” section many, may years ago, anything written and posted here isn’t necessarily done with an eye towards an audience. It’s done almost exclusively to vent my own frustrations and petty annoyances. Knowing that, the fact that so many of you hang around for the ride is downright humbling.

Fifty years ago today we heaved three Americans into space on the most audacious mission ever devised by the mind of man. They were heroes before they ever left the ground. Sometimes a picture really is worth a thousand words. 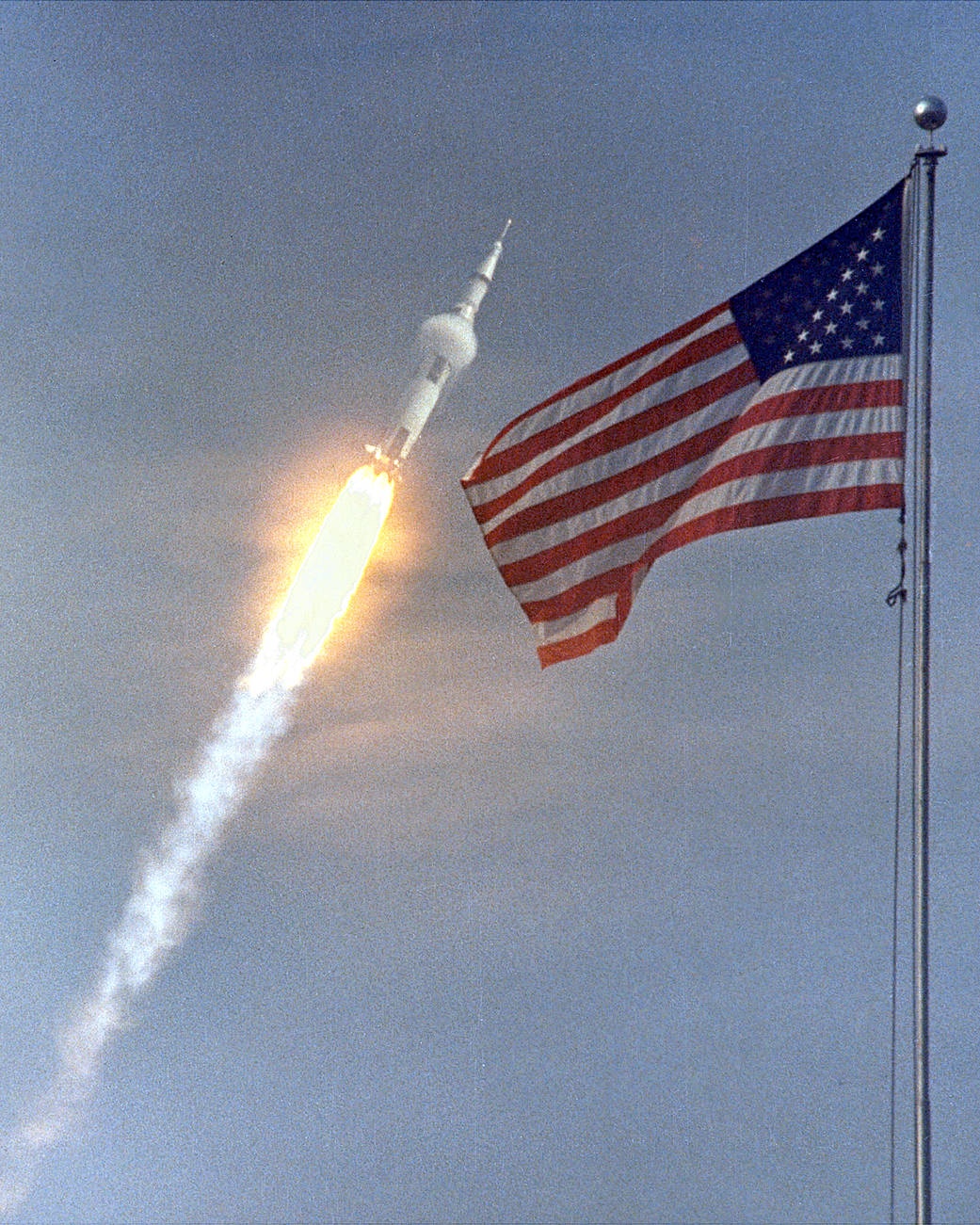 1. There are a few topics where I could probably claim expert level knowledge. There are far more in which I am reasonably conversant. There are many in which I can fake competence if conversations don’t last too long. The secret to successfully using my big ol’ brain box is to turn me loose on something in one of those first two broadly defined areas. Setting me loose in the third and expecting expert level performance is just going to result in you being disappointed and me being even more annoyed… especially when there are any number of individuals within spitting distance whose baseline knowledge on the subject exceed my own in every possible way.

2. It’s good to see so many people caught up in the history of #DDay75… but my inner history geek wishes some of them would pay attention to history a little more closely when it’s not the anniversary of monumental events. They’d be amazed at what it could teach them… and maybe they’d even gain a little insight about why nine times out of ten I’m mostly sitting around muttering that “they’re really going to try that again.” In my heart of hearts I really do think if given half an education in history people would be stunned by how little new there is under the sun.

3. OK, so here’s the thing… When I lay out a process for you that’s guaranteed to work correctly 100% of the time and you opt to not follow that process and create your own circuitous route from Point A to Point B, don’t then call me whining because it didn’t work. What happened there isn’t a process problem. It was a pure failure to follow fucking directions problem and that puts it squarely in your lane rather than mine. Good luck with it.

I had another post written for tonight, but in light of the great fire sweeping Notre Dame cathedral those words fade to less than insignificant.

With its cornerstone laid in 1163, Notre Dame saw nearly the entire rise of Western civilization in its shadow over the last 855 years. It saw Paris grow and expand into one of the world’s handful of indisputably great cities.

As a young 18 year old American in Paris, I was fortunate to pass through the cathedral over 20 years ago. Honestly I don’t remember many details of that trip now, but I remember standing in the nave of Notre Dame and being awestruck – exactly the effect that it’s long ago designers and builders had hoped to achieve.

I’m not religious in any significant way… but Notre Dame wasn’t about just being Catholic, or even being Christian. Yes, the great structure was raised to the glory of God, but it was also about celebrating great art, and architecture, and an undeniable knowledge that there is, and there should be, something larger than ourselves. You couldn’t stand before the great rose windows and feel anything other than humble.

Tonight I grieve for the people of Paris, and France, and the world at the loss of such a treasure trove of our collective history. This world is poorer and darker for its loss.