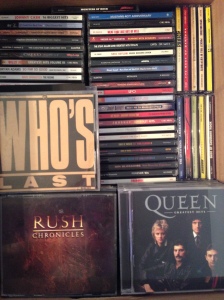 A few days ago, I went digging thought iTunes for a few songs that I hadn’t heard in a while. After years of being transferred from computer to computer, to external hard drives, and being tweaked, curated, and edited to the extreme, it seems that iTunes has been slowly leaking. Some of my favorite albums, carefully imported from CD seven or eight years ago before all my shiny plastic disks went to live in a couple of large cardboard boxes, were nowhere to be seen. Some had just one or two songs. I’m guessing that I “lost” half my music collection before I really started to notice it… as much a fan as I am of going all electronic, I’m suddenly glad that I didn’t sell those disks off for a buck or two a piece years ago.

So now, while I had planned on spending a good part of the day getting mt tax stuff together, I’m most likely going to be sitting here swapping out disks every two minutes until balance is restored. It’s ok. Once it’s done, the music will end up being saved as part of my ridiculously over complicated double redundant back up scheme. Then again, if I don’t have to do this again in seven years, it’s probably worth the effort.