Until two and a half weeks ago, I’d lived for a little over eight years in a canine only household. I’m not counting the tortoise because mostly he’s just a sunlamp loving rock that
needs daily greens and fresh water. Being cat free wasn’t because I harbor instinctive ill will towards. There was always a cat around growing up and I had one myself in the past. Adding another mouth to the herd was just never all that 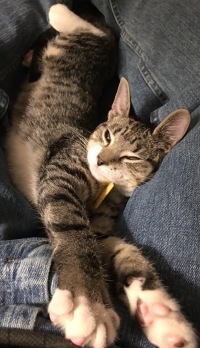 Since I haven’t given our new addition a proper introduction on the blog, it felt like something I needed to do. The nice folks at my vet’s office had been fostering Hershel since he was dropped off on their doorstep at about two weeks old. He ended up being the sole survivor of his litter-mates. They were looking for a permanent position for him so they could take on the next troubled animal… which of course paved the way for me to bring him home to Fortress Jeff.

I’ve never been particularly sympathetic to people, but animals, man, they seem to manage to find all my feels. I’m happy to report that he’s integrating even better than I had expected. I think what we’re all getting use to is having a youngling around the house again. With both the dogs well into advanced middle age and me being the youngest old man on the planet, the level of energy a kitten has is something to behold… even if it is occasionally troublesome for the rest of us.

Really, though, we’re all still getting to know one another and figure out where we all fit in. The dogs have been remarkably tolerant of this small creature that seems determined to pounce on them from every direction simultaneously. I’ve also learned just how many electrical cords I have strung around this house. Tonight’s project is coating as many of them as possible in soap, which he doesn’t seem to enjoy chewing on at all.

My initial assessment is that we’re going to enjoy having this little fuzzball around… especially once he decides there are better things to gnaw on than my fingers in the middle of the night. For now it’s all baby steps.