I don’t like change. That’s probably the lest surprising thing I’ve ever typed into this blog. In fairness, it’s not so much that I don’t like change as that when change happens it tends to either be a pain in the ass or do away with something I like. Often it does both simultaneously. I’ve spent a lot of time crafting a world that I both enjoy and that curtails the number of pains in the ass. Change, therefore, is something to be avoided and fought against when necessary. 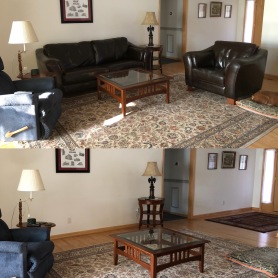 Having said that, though, my 2006 vintage bonded “leather” sofa and chair set had reached the point where it was shedding more than the dogs and cat combined. They didn’t owe me anything, having been moved three times and not being particularly expensive in the first place. It was the first “adult” furniture I bought after I closed on the Memphis house and I probably kept it around a year or two past it’s use by date out of sentiment if nothing else. Still, in this one case, it was time for a change.

One thing that nobody mentions about furniture is it’s not like replacing appliances or getting a new mattress. The guys who bring the new don’t generally haul away the old – one of those things that’s changed over time for the worse, in my opinion. The nice folks at Got Junk, though, we’re happy (for a price, of course) to come manhandle the furniture out of the house, load it on their truck, and drive it away to I care not where.

And now we’re waiting for the replacements to arrive. Waiting in a room empty aside from a recliner, couple of tables, and a dog bed. When I say Saturday can’t get here quick enough this week, I really, really mean it.