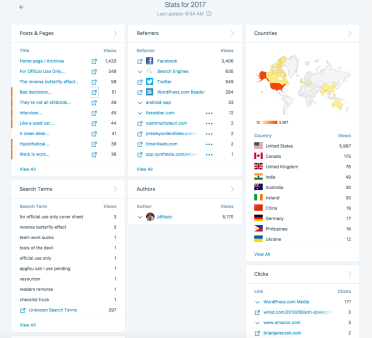 WordPress use to helpfully provide a year in review feature that would auto-magically spit out a post with all the facts and figures about what posts were popular, where your views were coming from, and all manner of information about what your readers found interesting. Sadly, they discontinued that feature a couple of years ago, so it’s up to me to come up with something to say here at the end of the year.

In plain language, this year was almost exactly average with about 6,600 views and 3,684 visitors. Some years have been better, some worse, and I guess that’s about all we can reasonably expect to say about blogging – or life for that matter.

The most viewed post of the year wasn’t even a post from this year. Instead, you have to reach back all the way to 2014 find the post titled For Official Use Only. Some people would mind that, but me, I’m not picky about where people are looking so long as they’re looking. In case you’re wondering, you had to drop all the way down to the third most viewed post to find one written in 2017. You probably won’t be shocked to find out it’s about people making bad decisions and the rest of us poor sods who have to listen to them talk about it.

In related news, it’s also the first year that “hot lesbian cheerleader” didn’t lead the ranking of search terms that brought people here. I’m not sure if that says more about what people are searching for or the content I’ve been posting this year… so make of that what you will.

I won’t even speculate what 2018 holds for the world. Assuming the new year is about the same as the old, it’ll be about equal parts joy and terror, with a heavy dose of “what the actual fuck” thrown in for good measure. The only thing I’m reasonably sure about is that as long as I have an internet connection and and a few thoughts that I can’t stand keeping to myself, I’ll be here writing them down and sharing them with the world. That too could be good or bad, depending on your perspective. Since it seems to help preserve my sanity, I’m going with the idea that remains a net good overall.